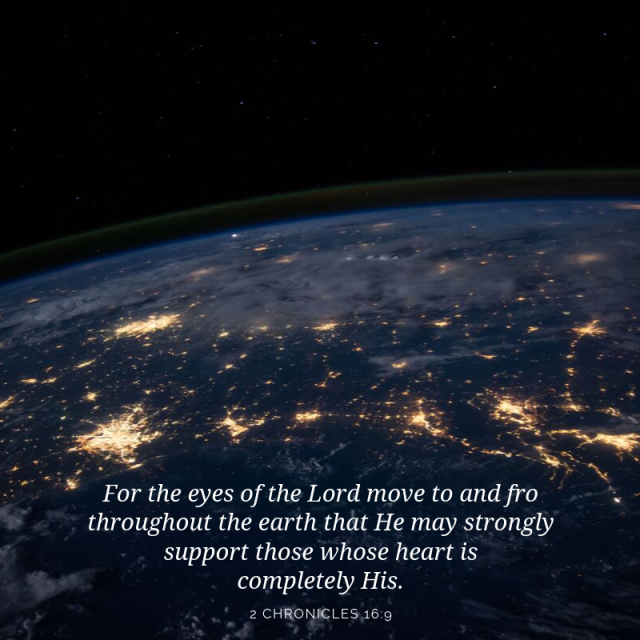 Ezra 4:6-6:13 tells of the challenges the Jewish people face as they attempt to rebuild the temple and their lives in Jerusalem. Letters are sent back and forth between their enemies and the Persian leaders to frustrate and stop the work. Years pass and progress is slow until a king named Darius comes to power.

During Darius’ second year, the people in Jerusalem defend their right to build by reminding the governors that King Cyrus had given permission many years before. The governors take this information to Darius, so he commands a search be made to find this original decree. Of course, it is found. The Jewish people are telling the truth. Darius is an honorable man, and he upholds the decree, even supplying the full cost out of his royal treasury, as Cyrus had stipulated. With no hindrances and full support, the temple is completed within four years.

There’s a little phrase in 5:5 that encourages and comforts me. Right in the middle of the controversy, before Darius settles the matter, the people continue to build. How did they have the boldness and confidence to go against those who ruled over them? This verse tells us, “But the eye of their God was watching over the elders of the Jews, and they were not stopped.”

Everyone around them said they were wrong. Those in power told them they had no rights. Yet, they went right on doing what God had called them back to Jerusalem to do. They got up every morning and went to the job site and laid another foundation stone. When everything seemed to indicate they would not succeed and their work would be in vain, they did not stop, because God had His eye on them. He was making the way, stone by stone, step by step, day by day. He protected them, supplied what they needed, and confirmed the work they were doing.

What if we really believed God’s eye is on us? If we are living our lives in obedience to the word of God and pursuing the work that the Spirit of God prompts us to do, then we can be confident that He will clear the way for us. We are never out of His sight, nor out of His care, even if it seems that everyone and everything else is against us.

For the eyes of the Lord move to and fro throughout the earth that He may strongly support those whose heart is completely His. (2 Chronicles 16:9)