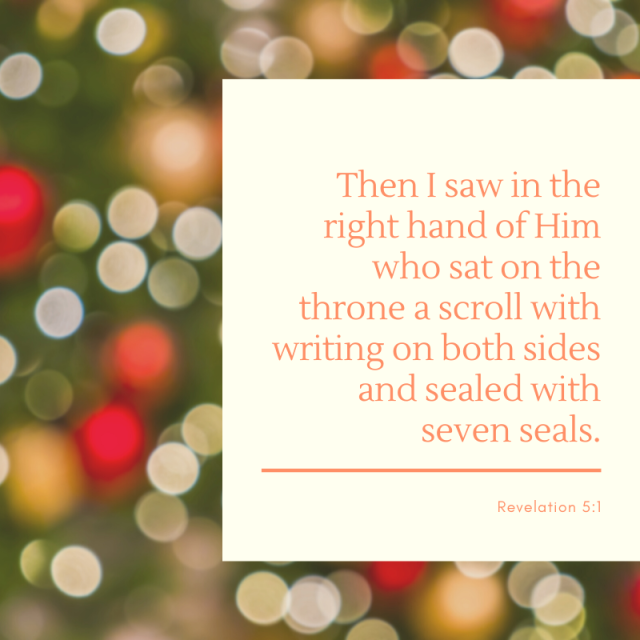 Today’s read was Revelation 4:1-8:6. John is invited into heaven, and we get a glimpse of it! He describes the throne room of God and its occupants with phrases such as “the appearance of,” “like,” “as if,” which tells us he is seeing things he really can’t put into words, so he describes them as best he can.
Of course, the center of God’s throne room is the throne, and God Himself, shining like jasper and ruby. We know that John sees more than beautiful light and sparkling jewels; he sees God’s hand, so God has at least the appearance of physical features he can identify. The Spirit of God is described as the “seven-fold Spirit” in the form of seven lamps in front of the throne, as well as seven horns and seven eyes on the Lamb, Jesus, the Lion of the tribe of Judah.
John describes continual worship going on in heaven, from the four unusual creatures which continually cry out “Holy, Holy, Holy,” to the myriads and myriads of angels, to the twenty-four elders on thrones surrounding God’s throne who fall down before Him in worship, laying their crowns at His feet.
John sees God the Father holding a scroll with writing on both sides and sealed with seven seals. How reassuring for us! We will learn that this scroll describes all that will happen to our earth as God pours out His judgment on the ungodly, purifies His people, the Jews, and protects and rescues the remnant of the faithful saints during the Tribulation. It is, literally, a prophetic history book, containing the end of the story of humanity as we know it. God alone holds it in His hand. He alone determines when it will be opened, and only Jesus is worthy to open it and begin the events that will count down the end of the ages. Our Father is in charge; we don’t have to worry or fret about what will happen in the future.
Chapters 6-7 describe the seven seals. Many people believe that by the time these events occur, those who have put their faith in Christ will be in heaven, taken by the Rapture. Scripture is simply not clear on this; you can make a biblical case for a pre-Trib rapture, as well as an end-of-Trib rapture at the moment of Jesus’ second coming, just before He completely destroys His enemies and casts Satan into the abyss. It will be what it will be, and we must persevere and hold tightly to our faith until we get home.
The first six seals unleash a world ruler who appears to bring peace (thus deceiving the entire world), followed by war, famine, and worldwide plague and pestilence, and natural disasters on an epic scale (earthquake, stars falling, the sky turning black, mountains and islands moving out of place). In the middle of all this, God commissions 144,000 Jews to proclaim the gospel and shows us that there will be many, many martyrs to die for their faith during this time. And that’s just the beginning.
What’s today’s takeaway? It’s the reassuring, comforting, peace-inducing sight of God holding the scroll. Nothing happens that takes Him by surprise, or without His permission, or outside of His plan, will and purpose. We can trust Him for our salvation, and we can trust Him to keep us to the end.

#siblings #goodgenes #beautifulbabies #sixmonths
It’s a beautiful day...in so many ways! #letsfly #grandbabies #nannysonherway
Thinking about these sweet babies this morning. This “Nanny” wishes they all lived next door but I’m so thankful their parents are following God’s plan first and foremost. Looking forward to heaven when there will be no more good-byes or “see you laters”! #lovethem #grandchildrenareablessing
In honor of Daughter’s Day...How I love my beautiful daughters and granddaughters. #daughtersday #myheartisfull #lovethem
Game Day #wegottickets #itshot #andiesfirstfootballgame #shescuter
My office this morning. Pondering some thoughts about a potential new devotional/book. Good coffee always helps! #mobile #coffeeshop #writerslifeforme #theWordspeaks

thoughts on theology and life in God's world, (hopefully) in a style readable by non-specialists

Exalting the name of Jesus through Christian essays

The Fight of Faith

The Way Of The Word

Make me to know Your ways, O Lord; teach me Your paths. Lead me in Your truth and teach me. Psalm 25:4-5a

Hangin' with the Hobart's

Never ending projects from a wife who can’t sit still

everyone needs a little Grace in their lives

Make me to know Your ways, O Lord; teach me Your paths. Lead me in Your truth and teach me. Psalm 25:4-5a