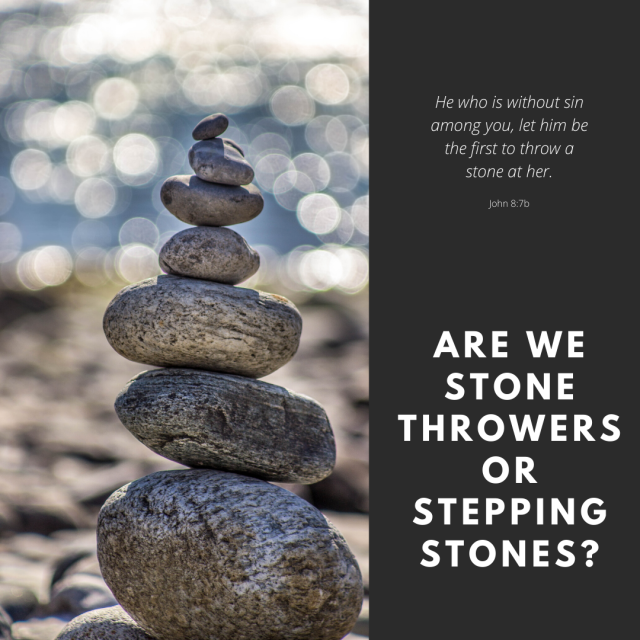 John 8 contains the story of “the woman caught in adultery.” We always refer to this passage in this manner, but I believe the lesson is more about the accusers than the accused. The scribes and Pharisees interrupted Jesus’ teaching in the temple court with their accusations. Their hard hearts are revealed in the way they treated her; they had no desire to restore her through repentance, but only used her, exposing her sin to the crowd. In their eyes, she was disposable. Their intent was to trap Jesus into either subverting the Law of Moses by excusing her sin or revealing Him not to be the gentle healer He had so far presented Himself to be.
If you’ve read the story, you know the outcome. At first, Jesus ignores them, but at their insistence, He makes a simple statement: “He who is without sin among you, let him be the first to throw a stone at her.” They had tried to use the Law against Him; He reminded them of the rest of the Law which they had conveniently ignored.
First, the Law stated that both the adulterer and the adulteress were to be put to death (Leviticus 20:10; Deuteronomy 22:22). As this woman was “caught in the very act,” either her partner in sin was present in the group and part of the scheme, or at the very least was party to it, in that he was allowed to miss the mock court proceedings. (The “good old boys club” has been around a long time!)
Second, the Law required that those who witnessed against a crime that called for stoning were to be the first to cast the stones (Deuteronomy 17:7). What great wisdom God has! This Law (ought to) cause a man to be very careful about accusing others of their sin, knowing he would be responsible for carrying out the punishment. How humbling would that be? How sure of our own righteousness would we have to be, to be bold enough to put someone else to death, in all probability for something we ourselves might be guilty of, yet not having been caught?
What was the result? Jesus’ words convicted the accusers to the quick. None of them were without sin, and perhaps guilty of the same sin. As the old saying goes, when we point our finger at someone else, there are three fingers pointing back at us! From oldest to youngest, they turned away, leaving quickly, lest their own sin be exposed as well.
Do you notice that Jesus never disagreed that the woman should be stoned? The Law against sin was true and right. Adultery is a sin, and the wages of sin is death. Yet the woman was forgiven; her accusers gone, Jesus gently urges her to leave her sinful life and sin no more. For now, Jesus’ mission was to seek and save the lost and make a way for sinful people to become righteousness through His sacrifice on the cross. Judgment for sin will come later for those who choose rebellion over repentance.
As Matthew Henry says, “In this, He attended to the great work which He came into the world about, and that was to bring sinners to repentance; not to destroy, but to save. He aimed to bring, not only the prisoner to repentance, by showing her His mercy, but the prosecutors too, by showing them their sins. They sought to ensnare Him; He sought to convince and convert them. Thus, the blood-thirsty hate the upright, but the just seek his soul.”
Has the Word convicted you of your own sin, or do you spend your time pointing out the sins of others? We ought to take Jesus’ advice and examine our own hearts. We warn against sin and its consequences, but we leave the judgment of the lost to Him. Instead of throwing stones, perhaps we should be stepping-stones, leading others to the same redemption and forgiveness that we ourselves have found.

One thought on “Are We Stone-Throwers or Stepping Stones?”