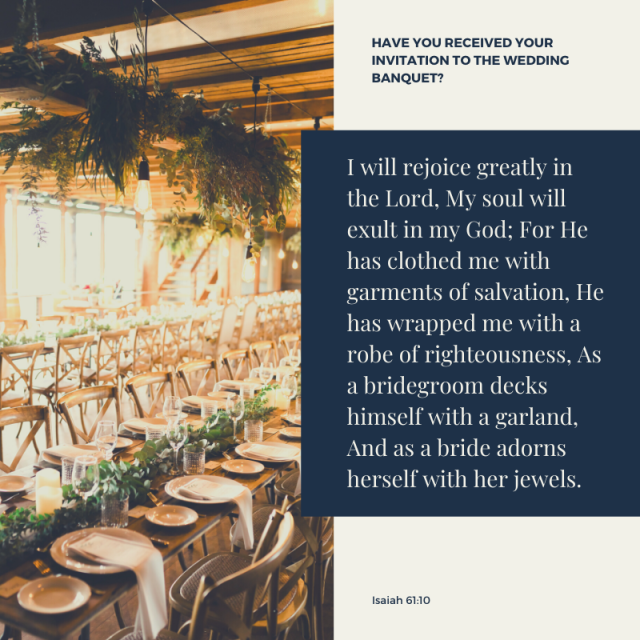 Today’s read gives us the details on several conversations Jesus has with the Pharisees and Sadducees, while the crowds and disciples are listening (passages from Matthew 21-23, Mark 11-12, Luke 20). Jesus seems to be focusing on a topic that we don’t like to talk about very much: “Not everybody goes to heaven.” This is really the problem that we have with Jesus. Who is He to say who gets into the kingdom of God and who doesn’t? If God is really loving and good, how can He let some people into His heaven and forbid entry to others? Is that fair?
Jesus tells three parables for us to consider. In the first, one morning a vineyard owner asks his two sons to go and work in the vineyard. The first son says, “I will not,” but later changes his mind and goes. The second son says, “I will,” but did not go. Jesus poses a question: “Which son did what his father wanted?” The answer is the first son because he illustrates Jesus’ point. He repented of his rebellious attitude and believed what his father said, and obeyed. The key to enter the kingdom of God (the way of righteousness), is to repent and believe.
In the second parable, a vineyard owner rents out his property to some farmers to work the land. The farmers would reap the benefits of being “hosted” on the land and would pay some of the fruits back to the owner. At harvest time, the owner sends servants to collect what is due to him, but the farmers rebel and beat and kill the servants. Finally, the owner sends his only son, the one he loved, thinking they would respect him. Instead, they kill him. Jesus asks his listeners how the owner should respond, and they realize the owner will cast out the rebellious farmers and give his vineyard to others. Jesus’ second point, the way into the kingdom of God, is to accept the Son’s authority.
The third parable describes a wedding banquet. A king invites many to come, but they refuse. They pay no attention. Some simply ignore the king and focus on their own lives. Others are insulted with his invitation and kill the servants who invite them. How does the king respond? He punishes the murderers and invites others, anyone who will respond to the invitation: the good and the bad. The wedding hall is filled, but one guest is refused entry because he is “not wearing wedding clothes.” Jesus’ third point is that many are invited, but few choose to respond. And those who respond must come clothed properly, which we know from other scriptures is a picture of exchanging our sin for Christ’s righteousness.
Repent and believe.
Accept the Son’s authority over your life and produce fruit for the Master.
Exchange your sin for Christ’s righteousness.
The point Jesus makes is clear. God is the owner of the vineyard. He is the king. He created this world, and He has the right and authority to judge. The good news?
YOU HAVE AN INVITATION!
The wedding banquet is still being prepared!
There is still room in the vineyard for workers!
God’s way is the fairest of all because, in Christ, He did everything necessary for us to gain access to heaven. We simply must accept the invitation, repent and believe. If we miss heaven, it’s not because God didn’t want us. It’s because we didn’t want Him.