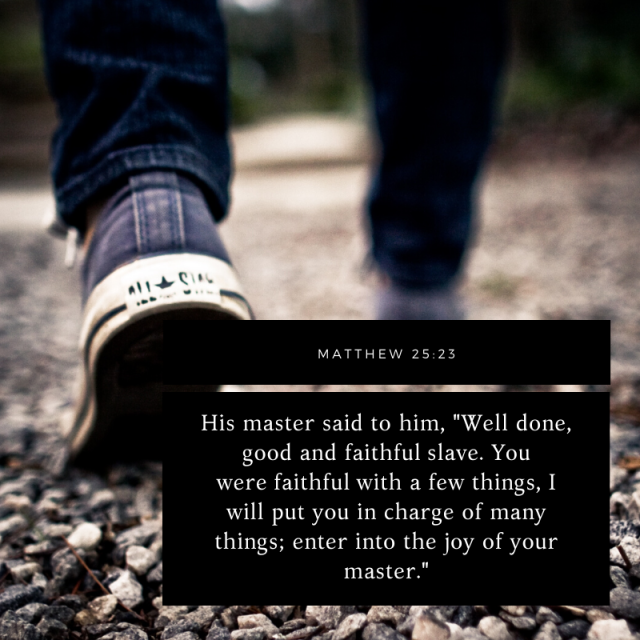 “If I had his money, I would do great things!”

“If I were as smart as she is, I’d be able to do really do something for the Lord!”

Have you ever thought or said something similar? Comparison is an easy trap to fall into. Jesus addresses this topic in today’s read in Matthew 25:14-30, the parable of the talents. I always thought it was interesting that the Bible refers to “talents” meaning a measure of money (one talent = 20 years of a day laborer’s wage), but the story corresponds so well to our American understanding of “talents” as the resources and gifts God has given us.

Jesus’ describes a man who planned to go away on a journey. He calls three of his servants to him and gives each of them a certain amount of “talents” (money). One receives five talents, one receives two talents, and one only gets one talent. Each man received an amount given “according to his ability.” In other words, the Master knew exactly what each man was able to steward. He did not put unreasonable expectations on either man nor did He underestimate His abilities. He gave each one just what they needed.

The first two men did well; each earned a 100% return on investment for their Master. The third man, however, was afraid he would lose his investment and simply buried his talent. When the Master returned, this man was called a “worthless” servant and thrown into the darkness. The other two were commended as “good and faithful” servants.

What’s the takeaway? Jesus is our Master, who has gone away on a journey. Until He returns, He has given each of us resources to manage on His behalf. We are to invest them to produce a return for the kingdom. He doesn’t expect us to compare ourselves to each other, but to manage well what He has given us. Whether it’s our money, time, skills, experiences, abilities, talents, or knowledge, we have a responsibility to steward them for His glory and benefit.

Do you wish you were gifted in a different way? Trust the Master who hands out the “talents.” Don’t bury what He’s given you or waste your time envying what you do not have; instead, use your “talent” to the best of your ability for the kingdom. One day you, too, will hear Jesus say, “Well done, good and faithful servant.”